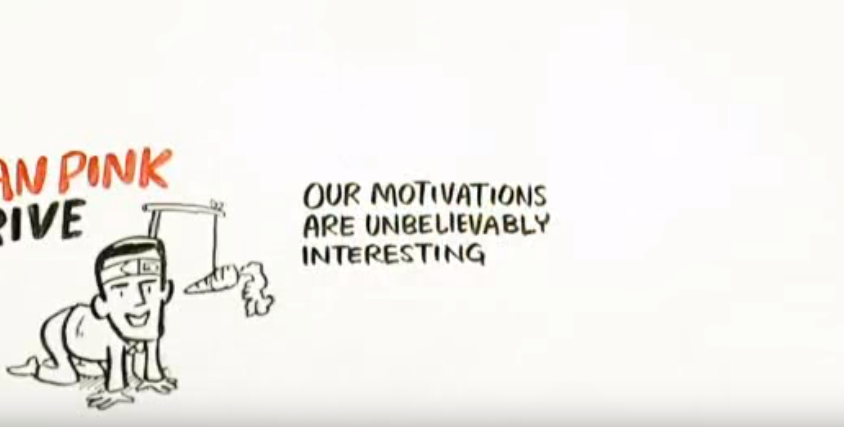 I recently had the opportunity to watch a 10-minute whiteboard overview video about Daniel Karpantschof’s philosophy on how to motivate employees. He believes that motivation is driven by purpose, not monetary incentives. With a high focus on employee engagement and increasing productivity, profit, and performance, I thought this video really challenges the way many managers and high-level executives think today. If you don’t have time to watch the 10-minute video (although I really encourage you do), I’ve recapped what I found to be the key take always below.

He starts off the video posing the hypothesis that you can’t manipulate people as easy you think. Karpantschof challenges two ingrained forms of current thinking:

The first study sited is one conducted by 4 economic professors: one from the University of Chicago, one from Carnegie Mellon, and two from MIT. Funded by the Federal Reserve Bank, this study tested students at MIT to see if monetary incentives increased performance.

The students had to do a series of tasks – cognitive tasks like memorizing strings of digits and physical tasks like throwing a ball through a hoop. Each student was awarded one of three monetary incentives (small, medium, and large) to perform.

Here is what they found:

The results from the first study begged the questions, “perhaps the stakes weren’t high enough? Perhaps going to a place where money was valued more, the incentive would be more productive?” So they conducted a second study in Madurai, a rural part of India.

The rewards broke down in this way:

Here is what they found:

Summing up the Research

When asking for simple straight forward tasks, you can use monetary incentives to increase performance – it works great. However, research supports that when tasks require some conceptual creative thinking, not only does money not motivate a person, but it can also hurt performance.

Money as a Motivator

Nevertheless, don’t underestimate money as a motivator. If you don’t pay people enough they won’t be motivated to work. Employers need to pay people just enough to take money off the table so the employee isn’t thinking about the money but the work.

Autonomy is our desire to be self-directed. This is in contradiction to traditional motions of management. If you want compliance, stick to the old ways. But if you want your employees engaged, self-direction is better. Employees want to do something interesting – management is about empowering them, and then get out of their way. Let them find their own answers; it could lead to better products, new products, and better solutions.

Mastery is our urge to get better at stuff…And that’s satisfying to people. Karpantschof dives into multiple examples – like Wikipedia – that is run by loads of people that have full time jobs. In their limited spare time they want to create something great to give to the world for free. People are motivated by challenge and mastery, along with making contributions.

Karpantschof urges when the profit motive gets separated from the purpose motive, bad things happen; things like bad products, awful places to work, and ethical mishaps. Mission statements like Skype’s –  to be disruptive for the purpose of making it a better place – helps center and align people to purpose. Humans are purpose maximizers not just profit maximizers.

The Big Take Away

Karpantschof perfectly sums up the big take away at the end of the video by saying,

“If we start treating people like people, and not assuming that they are simply horses – slower, smaller better smelling horses – if we get past this kind of ideology of carrots and sticks and look at the science, I think we can actually build organizations and work lives that make us better off. But I also think they have the promise to make our world just a little bit better.”

What do you think? Do you work for a “carrots and sticks” company, or one that understand truly how to motivate a person?